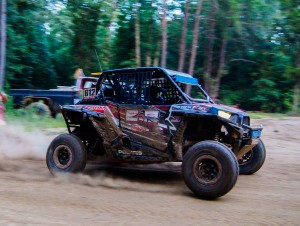 Round two of the UTV Rally Raid Series was held at Hawk Pride Off-road Park in Tuscumbia, AL with a total of thirty teams entered.  There were nineteen teams in the premier QR1 class and the racing was as good as ever.  Coming into round two at the new Hawk Pride facility most drivers were looking for two things: 1) did the course get fixed (ruts filled in) from the first round and 2) how would Hawk Pride handle the dust.  Well, we can say that Hawk Pride did an outstanding job on both and the course was in great condition.  There was dust, but it was more like a light fog.  There was not one times where we had to slow down because we couldn’t see.  Some of the ruts got dug out as the race wore on, but everything should get better after each event now.  The course is starting to get “run-in”.  The weather was beautiful.  It was a little disappointing to see the car count down from round one, but the actual driver count remained close to the same as many drivers decided to team up for this round.

The Double E Racing car was driven by George White and Keith Little.  George drove first until the team had to re-fuel and then Keith drove the remainder of the race.  The team started on the first row with the Keyscrete Team of consisting of Jimmy Keys and Russell Griffin (also running Double E Racing suspension).  Russell got the jump on George and the first corner was an eventful one.  For those that haven’t raced at Hawk Pride, you are on a clay road, going slightly uphill and the turn is a nice sweeping right hander (something you should be able to carry a lot of speed around).  Well, it was wet and slick.  Both George and Russell were going a little too fast and Russell ended up sliding into the far ditch.  George said, “all I could see was the bottom of the Keyscrete car and the tree It looked like it was about to hit and then I lost control myself and went sideways.  By the time I got straightened up, to my surprise Russell had saved it and was on the gas.”  Saying Russell was on the gas was an understatement and he must have really trusted those Double E shocks.  His first lap was a full minute faster than George’s (2nd fast time).  Not only was that lap fast, the next three were all in the seventeen minute range, which no one else come close to.  Keyscrete ended up having a belt.  This allowed Brit Mansell, driving his Octane Media car, to take over the lead.  Brit would never relinquish that lead and would go on to take the win.  George and Keith churned out consistent laps and would finish second for the second consecutive race.  They are now in the QR1 points lead with four races remaining.  Keyscrete would round out the top three. 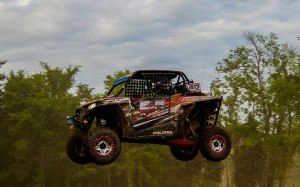 It was a good weekend for Double E Racing.  We had two cars on the podium and had three of the top six cars.  There were a total of seven Double E Racing suspension tuned machines at the event.   Everyone drove great and we are proud of all of the teams.  The following is their finishing order: 2nd –Double E Racing, 3rd – Keyscrete, 6th – Bone Racing, 8th – Team South, 12th – U.E. Racing, 15th – Basch Bros and 19th – TSR Racing.  We would like to congratulate every one of those teams and give a huge THANK YOU to them for trusting us with their suspension set ups.  Congratulations again fella’s!!!

Double E Racing would like to give a special thanks to a couple of people that made this round possible:  Anthony Rick and Adam Harvey with AirDam Clutches.  Without their help we couldn’t have raced this weekend.  Guy’s, you have no idea how much we appreciate everything you help us with!

Last but certainly not least, we would like to give a huge THANK YOU to all of our sponsors: Zbroz Racing, ARS FX, GBC Motorsports, Driven Racing Oil, ATV Zone, ATVScene.com, Scott USA, Curtis Sparks Racing, Brian Motorsports and JC Racing.