The Double E Racing sponsored team of Keyscrete Racing finished 2nd in the BITD (Best In The Desert) Vegas to Reno Race.  Enjoy the Race report by Dragonfire Racing and Keyscrete. 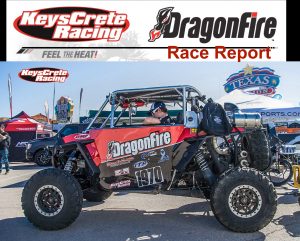 Las Vegas, Nevada— The team and car arrived at the Hotel Texas Station on Wednesday afternoon eager to get back to the dirt after the long break following the UTV World Championships.

The team passed registration, tech, and contingency with no issues on Thursday.  The crew made a clutch change and performed other final prep and we were ready for staging on Friday am.

Leaving from the start line in 3rd position, Russell passed the 2 cars in front of him within the first 15 miles. He had a 5 mile overall lead on the field as pulled into pit #6 for fuel. Pit #6 went quick and easy. 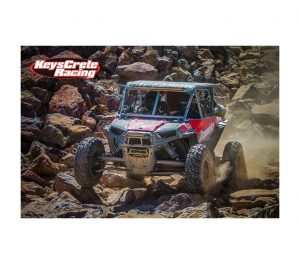 Just before Pit 8 (rm 273) Russell had stopped moving due to a flat tire. When he arrived the team put a new spare on the rack and away he went, still in the lead but that was now cut to about a mile.

At Pit #10 (rm 346) the crew was feeling really good about our position. As we prepared for the driver change we found out we had a broken axle to contend with. Russell and his navigator jumped out of the car and Jimmy and Everrett jumped in as the pit crew changed the axle.

Now 15 mins behind the leader Jimmy felt he couldn’t catch up, and instead ran a conservative speed to make sure the team finished. All went good for Jimmy apart from dust accumulating inside his helmet, which forced him to run the remainder of the race with his shield up—an issue the team will resolve for the upcoming race. 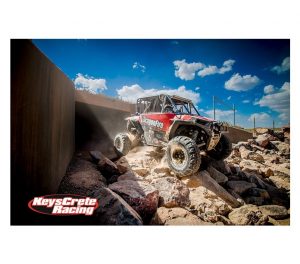 Right before pit #13 (rm 462) the car was handling funny- after a quick radio call to the crew they quickly addressed a right flat and we continued in a strong position with no other problems and we were glad to see the finish line after a long day!

We finished the race in 13 hours, 7 minutes and 35 seconds, putting the Dragonfire/ Keys Crete team in 2nd place for the Pro Production class, and 11th overall.

“We want to thank DragonFire Racing, Cognito Motorsports, Rugged Radios, OMF, ITP Tires, Double E Racing and their entire staff for the fantastic support! This has been a blast- as usual!”   —Jimmy Keys and Russell Griffin 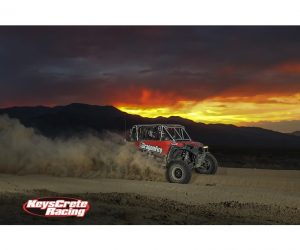 This entry was posted in UTV Racing.