Elliot Burns and Tim Farr took 2 of the top 3 spots in the opening round of the Lucas Oil Midwest Short course Series, finishing 1st and 3rd respectively at the famous Crandon International Speedway in Crandon, WI. 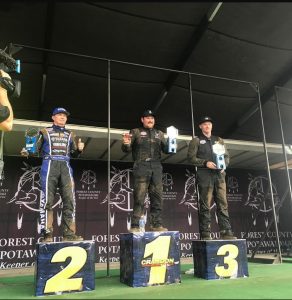 Due to bad weather, Friday’s practice and Saturday’s qualifying was cancelled, so starting position would be a random computer draw.  Elliot drew one and Tim drew ninth, which meant Elliot would start on the preferred pole position and Tim on the outside of row one for the infamous land-rush start at Crandon.  The race itself was a muddy mess and was actually ran in the rain. 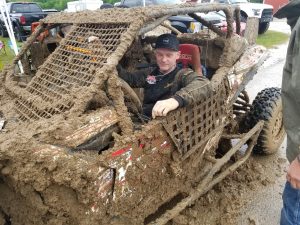 Both drivers got off to a good start, with Tim almost pulling the holeshot (almost the key word) and Elliot was in the top five.  Tim got roosted in turn two and was completely blind.  This caused him to veer off course without knowing where he was and hit the “k-rail” on the infield turn.  He quickly got some clean vision, gathered himself and put on a charge from dead last.  Elliot battled up front from the start and was smooth and consistent.  Eventually, he made his way into the lead and never looked back.  Tim, meanwhile, picked off multiple drivers each lap and made his way into third by the checkers. 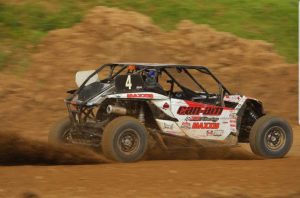 In the Pro Stock Class Ryan Mulder finished third.  Ryan drove a great race in horrible conditions and put his Yamaha on the box for the first time.  It was also the first podium in Pro Stock for Double E Racing.

We couldn’t be more proud of these drivers and the rest of the Double E Racing Athlete’s at this round.  Many had bad luck in the terrible conditions, including the other two Bak40 Motorsports drivers of Thomas Rheiner and Eric Gordon, but all held their heads high and persevered.